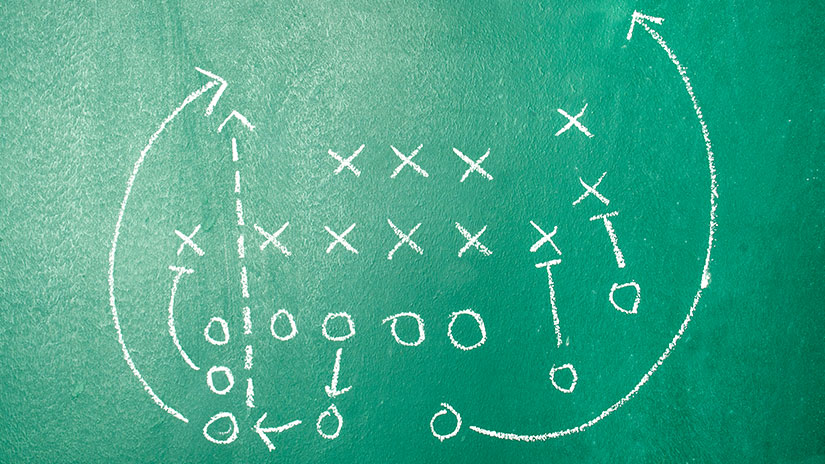 Three Possible Next Plays in Deflategate

Deflategate continues to enlighten us -- not just about American football, or alleged scandals, or even the science of air pressure in balls in cold weather -- but about what happens when parties can’t reach a negotiated solution to their dispute. Last week opened with an appeals court reinstating New England Patriots' quarterback, Tom Brady's 4-game suspension, and ended with a court filing by the Brady team. The many plays that have occurred and the ones yet to come demonstrate the perils of litigation, the power of having a Plan B or BATNA, and that there is still benefit to and time for a negotiated solution.

When my colleague at Watershed Associates, Leslie Mulligan, wrote about Deflategate in July and again in September 2015, she quite rightly predicted that we have not seen the last of the NFL v. Brady case. She exposed the various stakeholders and their potential interests – why they might want what they are demanding. She also talked about the parties’ Plan Bs, or BATNAs (best alternatives to a negotiated agreement) – what moves they might make if no agreement is possible.

What Leslie couldn't know then was how the 2015 NFL season or the appeal of a lower court decision would ultimately play out, and what would be the next moves by parties who so far had not found common ground on which to negotiate a resolution of their differences.

The parties in court are technically the National Football League (NFL) Management Council, and the National Football League Players’ Association (NFLPA). The parties who everyone talks about are NFL Commissioner Roger Goodell and the star quarterback Tom Brady.  Brady’s football team, the New England Patriots, are involved as they certainly care about winning games (and the revenue) that could be impacted by a suspension of Brady for his alleged role in the scandal. Roger Goodell is under great pressure to keep the League’s owners satisfied with his leadership decisions and equal treatment among teams, so the other teams’ owners are major stakeholders. And of course the NFLPA needs to demonstrate that it will protect the rights of the players, like Brady.

These parties chose to execute their litigation BATNA to resolve this dispute rather than negotiate a solution. As a former litigator myself, I know well the perils of litigation. Negotiation can be win-win or win-lose, but litigation is almost always lose-lose, and it has played out exactly that way in Deflategate.

The parties’ BATNAs in and outside the courthouse have continued to unfold. Last week a panel of the U.S. Court of Appeals for the 2nd Circuit reinstated the 4-game suspension issued by NFL Commissioner Roger Goodell against the New England Patriots' star quarterback, Tom Brady. This is probably not the final play in what has been a drama filled game of questionable tactics.

Unlike litigation, negotiating a settlement of their dispute had the potential to put the solution within the parties’ control. They could have mutually determined how they would be perceived, their investment of resources (15+ months, lawyers fees, personal time and stress) and the ultimate outcome. Litigation, on the other hand, held the potential to declare a final winner and a loser, raising the stakes significantly. Sometimes implementing the BATNA of litigation is the only way to satisfy our interests, but it usually comes at great cost to both parties.

There are always winners and losers, but it’s the Interests that underlie the wins and losses that really matter.

With commentary from me on what really mattered throughout Deflategate, let’s review Brady's win-loss record on and off the field, and in and outside the courthouse, and what was really at issue in each stage of this game since January 2015.

Brady wins
Jan 18, 2015 - Tom Brady leads the Patriots to win 45-7 in the AFC Championship game.
​►What matters?  Brady is a star football player and key to the Patriots' win record. A defeat of this magnitude certainly doesn't come about from pure ball tampering, but it does leave others wanting pay-back.

Brady loses
Jan 23, 2015 – NFL announces investigation into allegedly deflated balls (or as it turned out, possibly one ball); Deflategate is born!
►What matters?  NFL’s interest here is ostensibly the integrity of the game.

Brady wins
February 1, 2015 - Midway through the 4th quarter of the 2015 Super Bowl, the Patriots are down by 10 points, but Brady isn't resigned to lose. Brady leads the Patriots to victory as Super Bowl XLIX champions.
►What matters? Brady and the Patriots don’t need deflated balls to win.

Brady loses 3 consecutive moves
May 2015 – NFL issues harsh penalties. Brady gets a 4-game suspension to take place in the 2015 season for his alleged role in Deflategate. The NFL also imposes a $1,000,000 fine on the Patriots and takes away the team’s first and fourth round draft picks.
►What matters?  The official interests seem to be that the NFL won’t cover up even alleged complicity by one of its superstars and that it doesn’t “play favorites” with the teams. But there is a behind the scenes interest as well – that Goodell is beholden to all teams’ Owners and they haven’t forgotten past cheating by the Patriots.

June & July 2015 - Arbitration of an internal NFL appeal: NFL Commissioner Goodell, acting as the arbitrator, denies Brady’s appeal and upholds the suspension.
►What matters?  The NFL’s power to conduct the investigation as it saw fit and issue penalties as it deems appropriate are paramount to its leverage with the players’ association.

Minutes later? Beating Brady and the NFLPA to the courthouse door, the NFL files a lawsuit in US District Court in New York to affirm the arbitrator’s decision.
►What matters? NFL files in NY to avoid ending up in a Minnesota federal court that has been more friendly to players.

Brady is unstoppable throughout the 2015 NFL season.

Sept 3, 2015 – Federal District Court's Judge Berman vacates Goodell's decision and rules in favor of Brady. The Judge urged the parties to settle. Berman finds legal deficiencies that were fatal to the NFL’s suspension (inadequate notice to Brady of the possible punishment, lack of access to investigative files, and not letting Brady examine the lead investigator).
►What matters?  Goodell’s conduct (rulings and decision) at the hearing are deemed unfair and in breach of the collective bargaining agreement.

The NFL didn't try to stop Brady from playing in the 2015 season, and the Patriots ultimately secured the AFC East Division title.

Around the same time, the academics finally weigh in. MIT professor John Leonard releases his study of the data – the math and the football – and he concludes that “no deflation occurred and the Patriots are innocent. It never happened.” It’s all over YouTube: MIT Professor Debunks Deflategate. And Harvard Business School has around a thousand students grapple with a case study about Deflategate, developed by professors Marco Iansiti and David Sarnoff. Iansiti comments:

“The data are the data. A lot of the proceedings are now frankly more about the power relationships between different stakeholders in the whole environment, and less about what actually happened with the bloody footballs.”

►What matters? Brady and the Patriots have multiple moral victories that no court can erase. It’s clear that Deflategate is all about the power of the organizations involved, and litigation, as is often true, is only a vehicle to increase or avoid losing that power.

Brady loses
December 22, 2015, the NFL files an appeal to the US Court of Appeals for the 2nd Circuit. And in January Brady and the Patriots lose the AFC Championship to the eventual 2016 Super Bowl champions, the Denver Broncos.
►What matters?  The NFL’s power to enforce its decisions is paramount to its leverage with the NFLPA, regardless that the facts favoring Brady are mounting. On appeal, the law matters (not the facts), and winning on the field is as unpredictable as court.

Brady wins
March 2016 – Brady renegotiates his salary to include a $28M signing bonus for his $60M multi-year contract.
►What matters? Brady reduces his year-1 salary to $1M and thereby ensures that he protects a large portion of his earnings with a signing bonus the NFL can’t touch in the event that the 4-game suspension is reinstated on appeal, after the questioning at the hearing on March 3 didn’t bode well.

Goodell hedges on whether the NFL will enforce Brady’s suspension if the NFL is successful on appeal.

“That is not an individual player issue,” Goodell said then. “This is about the rights we negotiated in our collective bargaining agreement. We think they are very clear. We think they are important to the league going forward and we disagree with the district judge’s decision.”

►What matters? The NFL’s real interest is in protecting its rights under collective bargaining agreements; the facts aside and well beyond the implications for Tom Brady.

Brady loses
Apr 25, 2016 – US Court of Appeals for the 2nd Circuit in New York issues decision overriding Judge Berman and reinstating the Brady’s suspension, with one dissenting opinion.
►What matters? Judge Berman’s improper application of the law in overturning Goodell acting as arbitrator of his own decision. The NFL’s power in collective bargaining is re-established.

What are the parties' next moves?
Who wins or loses next?  More importantly, what really matters?

The NFL wants happy fans, the assurance of power in its collective bargaining agreements with the players’ union, and increased revenue. The NFL has lost a great deal of respect to protect those interests. Tom Brady is by all measures a star football player, but he wants to go down in history as an honest football legend, not to lose income, and as a winner on and off the field.

Will the parties rely again on the strength of their BATNAs, or will they finally see that their interests can be addressed in a negotiated agreement – that they can move from lose-lose to win-win?

Here are the 3 possible next plays in Deflategate:

The NFL has won the legal issues at this juncture, and may want to avoid any risk of a further appeal, given the strong dissent by Judge Katzmann, who found the Commissioner breached his authority.

Brady doesn’t have much more to gain even if he wins the next court decision, given that his popularity actually increased during Deflategate, the Patriots re-signed him and helped him avoid most of the financial hit a suspension will impose, and there are many experts who question not just the NFL’s actions during Deflategate, but the evidence itself, leaving Brady’s integrity largely intact.

Of course Brady and the Patriots want to win football games, and the team’s chances of reaching the playoffs in the upcoming season are increased if Brady plays those first 4 games. But that outcome is attainable in a settlement, and does not need a court decision. We don’t know what are the parties’ next moves, but we can be pretty sure everyone wants to see more of Tom Brady playing football, especially when he may not have many seasons left.