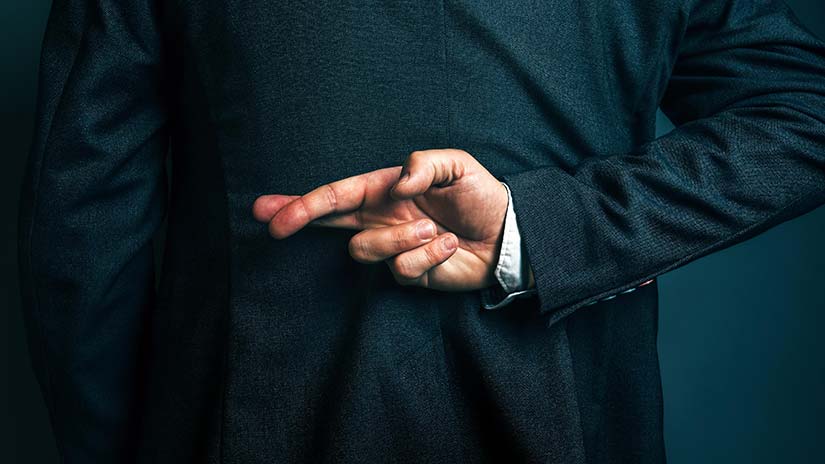 Lying is not an easy subject to discuss.

How many lies did you tell today? None? How many times were you lied to today? Not sure? According to the latest research – people lie on average 3 times every 10 minutes, and most of us can't recognize a lie over 50% of the time. So what’s a negotiator to do when your counterpart is not going to announce that they are lying?

Everybody lies. You don’t believe this do you? Think about these everyday examples:

Lying plays out regularly in negotiations just as it does in everyday conversation.

Imagine a building owner who says that for this deal to work, the buyer interested in the building needs to close the deal in 2 months. The prospective buyer in fact wants to close within 2 months, but rather than exposing this interest, the buyer exacts some concession from the owner in exchange for agreeing to close quickly. Is this lying? Or just good negotiating?

We are not in any way suggesting that anyone should tell factual lies in a negotiation - ever - or in any way commit fraud, which his illegal. (Fraud is a misrepresentation of material fact upon which someone justifiably relies to their detriment and suffers resulting damages, and the offense varies by jurisdictions worldwide.) If you are asked a question in a negotiation and you don't want to say the truth, you are obliged to find a way to not answer the question so that the other party knows the question remains unanswered.

But lying happens in negotiations without any factual lies being exchanged. Lying occurs regularly in a back-and-forth conversation where each party recognizes they would have to ask for candor on each and every topic to expect to get it. That's not practical in an intense negotiation, so negotiators understand that the other side is there to seek advantage, leaving little room for any justifiable reliance on your negotiation counterpart’s "negotiation lies."

Why not just negotiate in a straightforward and honest exchange?

Here are just a few examples of why it doesn't happen:

What strategies can you use to close a mutually beneficial deal given that Negotiators Lie?
There are many:

Ask questions
You are negotiating a lease for additional office space. The real estate agent tells you that if you don’t increase your offer by $10K by the end of the day, you’ll lose the space to another company. Is she bluffing or is the deadline real? Ask her lots of questions about the deadline and the competing offer: What time today? Why today and not tomorrow? Who told her this? Why does she believe it’s true? Could it be her source was bluffing? What exactly did they say? When did they tell her?  If she was being straightforward, her answers will likely come easily. But if she was bluffing, she will have to go into cognitive overload to keep her story believable. While she is answering, assess how hard she is thinking in order to produce the answers, because even good lyers have to work hard mentally to keep their story coherent.

Propose ideas and options
What do you do when your negotiating counterpart says, “Take it or Leave it.” Do they mean it? Maybe. Is it a lie? Often. Should you test it? No, you should ignore pronouncements of “take it or leave it.” It’s up to you to float options – What if? How about? I wonder how we’d each feel if we can’t reach an agreement? Might another way work? Does your counterpart engage in discussion of these hypothetical options? If so, they didn't mean "take it or leave it" literally.

Use economically equivalent offers
Negotiators often add extra issues to the pot so that they can give in on the ones they don’t really care about and thereby seem cooperative, motivating you to concede on the issues that matters to them. If your counterpart insists that price, delivery time and contract length are all critical and can't be prioritized, offer 3 economically equivalent deals where one of these is addressed in each offer. The offer your counterpart chooses to discuss most will provide clues as to what issues really matter. Now Probe more to find out why that issues is so important.

Offer contingent concessions
Your counterpart insists something is true that you can’t verify: “We plan to build 3 plants next year so our capacity will be doubled by the time you need more product.” Agree to move volume from other suppliers as long as the plants go live by a date you are comfortable with. And put that contingency in writing.

If you think you can spot a liar, then you won’t need these strategies (but at least check your reliance on tell tale myths for spotting liars at the door). And beware: According to the latest research and expert Leanne ten Brinke, you’d be overestimating your chances of successfully knowing a lie when you hear it. A good liar’s lie-revealing facial expression only lasts 1/15th of a second and takes an expert to recognize; body language can give clues but results in many false positives. And accusing a person of lying who didn’t in fact lie, will likely cause the honest person to become defensive – a clue we often misread as protecting a lie. False accusations usually destroy trust, which leads to more lying.

Keep it simple
Avoid lying in your negotiations as much as possible, even though it's a natural part of the game. Expect your negotiating counterpart to lie quite a bit. Don't get mad (it'll backfire); Use Best Negotiating Practices and defensive strategies to find the truth so you can make good decisions and reach a mutually beneficial and sustainable agreement.

Contrary to popular belief, 9 out of 10 times you will benefit greatly by making the first offer.